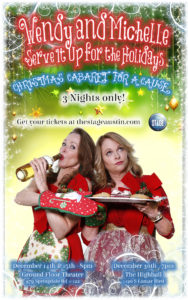 WENDY AND MICHELLE SERVE IT UP FOR THE HOLIDAYS is a fun and tune filled cabaret evening with more than a little singing. A clever comedic hodge podge from Michelle Cheney and Wendy Zavaleta who, dressed in matching shimmering blue cocktail dresses, serve up holiday cabaret fabulousness. This evening of cabaret entertainment touches on everything from re-gifting to navigating office holiday parties and even shopping overload with tongue often firmly planted in cheek.

The evening was filled with multiple memorable moments such as Wendy’s lovely version of Vince Guaraldi’s “Christmas Time is Here” (from the first animated Peanuts Christmas special) and Michelle’s hilarious rendition of “Surabaya Santa” (from Songs For A New World). In addition to a mix of both traditional and nontraditional Christmas songs and carols there are even a couple of new tunes using the music of Stephen Sondheim. Although they rarely sing together during the evening, when they do, their two voices blend together in wonderful ways.

The band consisting of Alex Freeman on Bass, Ben Dubois on Guitar, Chris Ehresman on Drums and Keyboards from Music Director David Blackburn rocked the proceedings with aplomb and some pretty epic ugly Christmas sweaters.

WENDY AND MICHELLE SERVE IT UP FOR THE HOLIDAYS is a fun and funny evening of music and laughs from two women who know their way around a cabaret act. Two additional reprise shows, billed as the XMAS HANGOVER, have been scheduled for December 30th (at 8:30 PM and 7:00 PM) at The Highball Austin. If you’re looking for a musical celebration of the season that will give you all the feelings of the holidays in high style, take time out to catch one of these two extra performances from these highly talented ladies.

The Stage Austin plans to construct and operate a self-sustaining venue that will not be subject to extreme fluctuations in performance and rehearsal prices. A holding company called Trusted Obscurity was formed in late 2016 with a goal to promote live theater in Austin. It was formed by a group of local actors, producers and directors who were concerned about the continued loss of live theater venues in Austin. The Stage at Water Street Project is the first of several live theater projects planned by Trusted Obscurity.

Trusted Obscurity is purchasing 4400 square feet in a new mixed use development project at I-35 and Cesar Chavez to create a brand new, state-of-the art theater. By being a non-profit organization and by owning the property, the theatre will not be at the mercy of landlords waiting for a redevelopment opportunity nor will they be subject to property taxes. Trusted Obscurity will also create and own a for-profit lounge,called the Ghost Light Lounge to house further cabaret productions. Plans are for it to be a coffee shop by day and a lounge in the evening, open seven days a week.

The new venue also plans on compensating artists and providing a safe work environment. The Stage at Water Street will have a resident theater company, which will produce seven shows a year using the space for a total of 43 weeks. Each production will have auditions open to the public. This will leave nine weeks per year available for rental opportunities for some of the homeless theater companies in Austin.They are also exploring opportunities to host dance companies, arts education organizations, and others in need of performance space.

The venue itself is designed as “flex space” to allow it to accommodate the needs of a wide range of the performance arts. It will have 115-140 seats, with a flexible “black box” approach. Neither the seating nor the stage will be permanently locked in place, allowing for imaginative uses of the space. Additional fund raisers will be held to raise the money necessary to complete the project.

WENDY AND MICHELLE SERVE IT UP FOR THE HOLIDAYS Produced by The Stage at Water Street, presented at Ground Floor Theatre (979 Springdale Rd, Austin, TX, 78702). All proceeds from the shows went to The Stage Austin’s sustainable model for the future of theater.

Two additional shows, billed as XMAS HANGOVER, have been scheduled for December 30th (at 8:30 PM and 7:00 PM) at The Highball Austin (1120 S Lamar Blvd, Austin, Texas 78704). The event is free with donation table and raffle planned to raise money for The Stage Austin’s forthcoming new theatre.