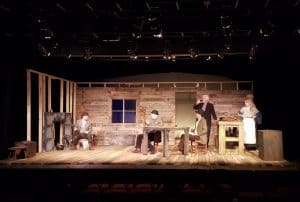 In 2020, theaters all around the world were hit hard with the Covid crisis. The blow was swift and sharp. Productions were shut down, rehearsals halted, production seasons canceled, and a plethora of creative talent found themselves suddenly without work. The industry wasn’t alone as restaurants, movie theaters, theme parks, live music – really any provider of entertainment and service to large groups of the public found themselves suddenly without a stream of revenue. The lights are still out on Broadway, but as the vaccine rollout gains some steam, we are seeing signs of life.

The Stage Austin was no exception to this misfortune. Our first full scale production had just opened on March 13th, 2020.  We produced John Millington Synge’s classic, The Playboy of the Western World at the Dougherty Arts center in Austin, TX. And oh…. what a beautiful production it was! Some of Austin’s finest actors had been rehearsing for weeks, working with a dialect coach to perfect the Irish English (Hiberno-English) accent under the watchful eye of director Karen Sneed. The set, designed by Greg “Pops” Bayless was constructed to give the audience a feeling of being inside a wooden pub, where characters would cycle through to get a glimpse of the mysterious stranger who had just come to this small village.  Even the floors were composed of wood slats to complete the immersive experience.

As opening night arrived, we couldn’t have imagined that we would soon be leaving the set, props and costumes behind to gather dust for several months. In the end, we were able to stage only two performances of this beautiful play.

So, what’s next? Dare we do this again?

Why yes… yes, we do. If it is insanity or folly to want to produce live theater these days, we gladly claim the malady. We are fortunate enough to have another slot at the Dougherty Arts Center this fall and will be announcing auditions soon for Ira Levin’s Deathtrap, directed by our own Jeff Hinkle! We are so ready to have some fun.

The Stage Austin would like to again thank all the talented people who came together to put on The Playboy of the Western World.

Our Facility
The Team
Trusted Obscurity
Support Us